Information About Jaipur, History & Why Jaipur is Called Pink City?

Information About Jaipur, History & Why Jaipur is Called Pink City? 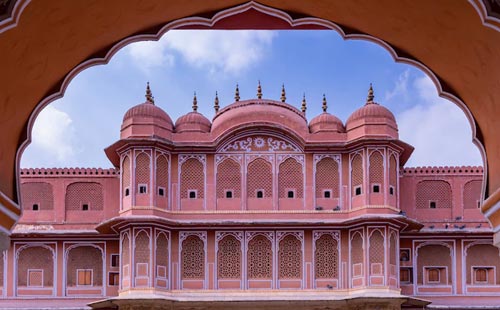 Introduction and History of Jaipur

The capital of Rajasthan, Jaipur, was built in 1727 AD by Maharaja Sawai Jai Singh II. It is from his name that the city extracts its name. Jaipur happens to be the first planned city of India. Maharaja Jai Singh, who was only 11 years old, came into power after the demise of his father, Maharaja Bishan Singh. Kachwaha Rajputs, who came into power in the 12th century, are Jai Singh's ancestors.

Their rivalry with Sisodia Rajputs, rulers of Mewar, helped their alliance with the Mughals. Mughals, too, supported the Kachwaha Rajputs against SisodiaRajputs, resulting in Kachwahas attaining a decent place in Rajasthan. They ruled the kingdoms of Mewar (Udaipur) and Marwar (Jodhpur) from the glorious Amber Fort. Jai Singh supported Aurangzeb's son Azam Shah in the battle of succession, which created unrest among people. But Azam Shah lost this bid to the throne to his brother Bahadur Shah.

Azam Shah then demanded the removal of Jai Singh from the throne. With the ally of the Mughals, Jai Singh brought himself back to power. The kingdom flourished in his reign. Jai Singh built his capital around Amber Fort, and Jaipur was eventually developed as India's first-ever planned city by a chief architect from Bengal, Vidhyadhar Bhattacharya. Vidhyadhar Bhattacharya, following the principles of Shilpa Shastra (the science of Indian architecture), and referencing the ancient Indian knowledge on astronomy, further developed and discussed the plan with Jai Singh. It is said that the foundation of the city was laid down on 18th November 1727 by Jai Singh himself. It took minutely plans strategies and 4 years for the city's major places-the roads, the square, palaces, and the fortification of the boundaries to come to form.

After the death of Jai Singh in 1744, his sons fought for power, and without a king, the city became open to intrusion by neighbouring states. Rajputs and Marathas took over most of Jaipur. Later in 1876, Maharaja Ram Singh adorned the city in pink color, which is supposed to be associated with hospitality, to welcome the Prince of Wales (later King Edward VII) to the city; and thus, it acquired the name Pink City. Maharaja Ram Singh also built Ramgarh Lake to provide water to the budding and prospering city. In 1922, the throne was taken over by Man Singh II, and it was at that time buildings like secretariat, schools, and hospitals were built. After India got independence, Jaipur merged with Jodhpur, Jaisalmer, and Bikaner to form India's largest state, with Jaipur as its capital.

Why Jaipur is Called The Pink City Of India?

Jaipur has been popularized with the name of Pink City because of the color of the stone exclusively used for the construction of all the structures. But this is not 100% true during the rule of Sawai Ram Singh I, and the city was painted pink to welcome HRH Albert Edward, Prince of Wales (who later became King Edward VII, Emperor of India), in 1876. Many of the avenues remain pink, giving Jaipur a distinctive appearance and the epithet Pink city.

Pink in color and pink in vibrancy, the city of Jaipur is one of the most beautiful and magnetic cities of India. One always falls short of words while describing the bounteous charm that the city captivates the visitor with. The culture, architecture, traditions, art, jewelry, and textiles of Jaipur have always charmed travelers. It is one city that, even after modernization, still holds to its roots and values.

Apart from being the capital of Rajasthan, Jaipur is also the largest city in the state. The city's foundation dates back to the eighteenth century, with credit to the great warrior and astronomer Maharaja Sawai Jai Singh II. The glorious past of Jaipur comes alive in the palaces and forts in the city where once lived the royal clans. The majestic forts and Havelis, the beautiful temples, the serene landscapes, and the rich cultural heritage have made Jaipur an ideal destination for tourists.

How to Reach Jaipur By Air, Train & Road

By Air: Jaipur Airport is 10 km away from the city. Jaipur is connected by domestic flight with cities like Delhi, Mumbai, Kolkata, Ahmedabad, Jodhpur and Udaipur.

By Road: Jaipur is well-connected by road with all the major cities of North India including Delhi, Agra, Jodhpur, Bikaner, Udaipur, Ahmedabad, etc.

Language of Jaipur, the Largest and Capital City of Rajasthan

The official language of Jaipur is Hindi. English is the additional official language. Dhundari is the native and main dialect of the city. Marwari and Standard Hindi dialects are also spoken in the city, along with English.

Climate And Average Weather Year Round in Jaipur

In Jaipur, the wet season is oppressive and partly cloudy; the dry season is mostly clear and hot year-round. Over the course of the year, the temperature typically varies from 48°F to 104°F and is rarely below 42°F or above 110°F.

Jaipur in India has a hot semi-arid climate. In July and August, you will experience a short monsoon, and it becomes very hot in Jaipur starting April, with average temperatures above 37 degrees Celsius (98° Fahrenheit). That's why we recommend visiting Jaipur from November until March.

Other facts from our historical climate data

Which months have the greatest rainfall in Jaipur?

Most rain (rainy season) is seen in July and August.

Which is the warmest month in Jaipur?

Which is the coldest month in Jaipur?

Which is the wettest month in Jaipur?

August tops the wettest month list with 192mm (7.6in) rainfall.

Which is the driest month in Jaipur?

November is the driest month with 3mm (0.1in) precipitation.


3 Interesting Facts About Jaipur That Will Jaw Drop For You

1. Hawa Mahal – A Building Without Any Foundation

Known as the “Palace of Breeze” – the place is considered a landmark of Jaipur. Built by Maharaja Sawai Pratap Singh in 1799, this five-story building has 953 windows that are beautifully carved to allow the breeze to blow through the palace and makes it a perfect summer palace. It looks like a honeycomb of a beehive from its exterior with these Jharokhas, which can keep this summer palace cool all around the year. The palace's beauty lies in the fact that it is standing on the edge of City Palace Jaipur and extends to the Zenana, or women’s chambers.

2. Most Planned City in India

Jaipur is one of the first planned cities in India. According to Indian Vastu Shastra, it was planned by a Bengali architect named Vidyadhar Bhattacharya in 1727. The directions of each street and market are East to West and North to South.

3. Hub To The Most Expensive Hotel Suites

For Jaipur, which has been touted as one of India's royal and luxurious cities, lavish housing hotels are common. But do you know some of the most famous hotels are there in Pink City itself? Yes, that is true as the place attracts tourists around the year and is also a favorite destination for weddings. Hence, it houses some fantastic hotels like The Raj Palace, The Oberois, ITC Rajputana, Trident, etc. Doesn’t it fascinate you to plan a trip to Jaipur now?

Jaipur is famously called the Pink City, one of the reasons it attracts millions of tourists every year is its vibrant heritage culture. Jaipur is famous for its lively people who bring the city to life by celebrating several fairs and festivals. Rajasthan has different forms of folk entertainment, customs and attires, which vary from region to region, holding to the maxim of unity in diversity. People rejoice and revel with great joy keeping alive the age-old traditions in the form of festivals in the capital city of Rajasthan.

Jaipur is home to historical forts and palaces. Major attractions in this category include:


Expore more about Best Place to Visit in Jaipur.

Cost of Living in Jaipur City

Best and Safest Places to Live in Jaipur

There are several architecturally beautiful temples in the city of Jaipur. Major attractions include the following famous temples:

Jaipur is the city of palaces, forts and royalty. Also, the city of magnificence and splendor. The city is known for one more thing: its delicious cuisines. Yes, we are talking about authentic Rajasthani dishes high on the taste quotient. Dishes ranging from dal-baati-churma to laalmaas, keema baati, ghewar, kulfi, and many other things to eat in Jaipur that a treat for your taste buds. Rajasthani people sure know how to live in grandeur, and their food is as mind-blowing as their living style.

Jaipur is heaven for those who are visiting here for traveling & living. Or, if you want to feel the royalism, you must visit Jaipur to experience the history, culture, heritage, and architecture.

Q1. Which are the famous local cuisine of Jaipur?

Q2. What is Jaipur famous for?

Q3. Which Are the top packers and movers in Jaipur?

Ans. Here is the list top packers and movers in Jaipur city.

Q4. What is the current PIN code of Jaipur?

Q5. What is the old name of Jaipur?

Ans. Jaipur got the name ‘Pink City’ in 1853, when the reigning King Sawai Ram Singh painted all royal and official buildings in sandstone color to commemorate the visit of Prince of Wales to the city.

Q6. What is the capital of Rajasthan?

Q7. Where is Jaipur located?

Ans. Jaipur, city, capital of Rajasthan state, northwestern India. It is situated in the east-central part of the state, roughly equidistant from Alwar (northeast) and Ajmer (southwest). It is Rajasthan's most-populous city.

Ans. Jaipur gets its name from its founder Maharaja JaiSingh II (1693-1744) the great warrior and astronomer. He came to power at the age of II on the death of his father Maharaja Bishan Singh.

Q9. Is jaipur a metro city?

Ans. Heritage city of Jaipur on Wednesday added another feather to its "royal" cap with the commercial launch of Metro. The city became sixth in the country after Kolkata, Delhi, Bangalore, Gurgaon and Mumbai to have the enviable transport system.

Q10. What is the nickname of Jaipur?

Ans. The nick name of Jaipur is Pink City of India.

Jaipur to Other City

How Late is The Closest Grocery Store Open?